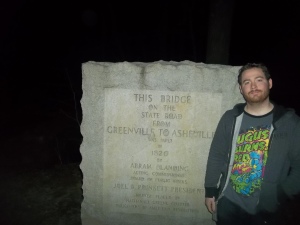 Via: http://en.wikipedia.org/wiki/Poinsett_Bridge “Poinsett Bridge, named for Joel Roberts Poinsett, was built in 1820 as part of a road from Columbia, South Carolina to Saluda Mountain and is one of the oldest extant bridges in South Carolina. The bridge includes a 14-foot Gothic arch and stretches 130 feet over Little Gap Creek. It may have been designed by Robert Mills, architect of the Washington Monument. Though no longer in use, the stone bridge remains largely intact. The bridge is part of the 120-acre (48.6 ha) Poinsett Bridge Heritage Preserve. A picnic area and walking trail are planned. The bridge is off U.S. Highway 25 north of Greenville, South Carolina. After passing South Carolina Highway 11, turn right onto Old US 25. Then turn right onto Callahan Mountain Road near North Saluda Reservoir. Poinsett Bridge is on the left side of Callahan Mountain Road. The bridge was named to the National Register of Historic Places in 1970.”

(Maxwell inside of the Gothic Arch) Via: http://theshadowlands.net/places/southcarolina.htm “Rumor has it that a slave was once hung under the bridge and his ghost still haunts it. Several of the locals say that they have been unable to start their cars when they got ready to leave. Several locals also report that they hear a loud scream when the light gets to them.” Wow, what a beautiful piece of History. What an Investigation! Not only is this place an amazing relic of South Carolina History, It is Known as a dark and mysterious breeding ground for evil. Maxwell and I (Aaron Sprouse) headed to the Fabled DARK CORNER. The Air was clean, crisp and cold. The darkness that plagued the surrounding forest was breathtaking. It was almost as if I couldn’t breathe as we walked across the bridge. The both of us immediately felt as though we were being watched. Chills ran through my body at every whisk. Every word spoken, every provocation of a spirit increased the feeling of overwhelming fear. Maxwell (the biggest investigatory skeptic I know) heard a whisper in his ear, that slightly burned, and the heat flowed down his neck. We had a baseline EMF reading of around 72.00 before, but as Maxwell encountered the whisper it immediately spiked to 145.6 and stayed at that level for approximately 45 seconds. While atop the historic bridge we decided to have a sitting recording session. We asked several questions and both heard faint whispers. I had an overwhelming urge to snap pictures to my left (the sounds of running startled me.) The hairs on my neck were standing erect as I snapped several photos, all of which were blank, though Flash was on. The camera had a full battery and repeatedly shut off. The voice recorder would shut off as well, and a working EMF meter went all the way down to zero as if some entity had drained the power out of our devices. We made our way down the embankment to the beautiful Gothic arch under the bridge. There we attempted to hold a recording session, but the raging water of little gap creek made all of our recorded data useless. While down there Maxwell and I both heard what sounded to be a carriage traveling across the bridge. Though it was awesome (SCARY AS HELL) we had no evidence of his. Then we heard it again, we rushed to the top of the bridge in hopes that we could snap a picture of the ghostly carriage, another blank photograph. As a paranormal group that usually disproves hauntings and debunks urban legends, we were convinced. Eager to go over our photographic and audio data our excitement was through the roof. What did we find? Pictures of a beautiful place, and oddly blanked out pictures. Only empty responses on our voice recorder….. NO SCIENTIFIC EVIDENCE OF THE PARANORMAL, WHATSOEVER. Due to the unbelievable experiences we had there, yet the lack of evidence; we cannot rule either way. Nor can we close the case. CASE STATUS: OPEN CASE CONCLUSION: UNDECIDED

I RECOMMEND YOU GO CHECK THIS PLACE OUT; IT IS A BEAUTIFUL PART OF South Carolina History.

(we’re here to get your ghost ) – Aaron Sprouse

This site uses Akismet to reduce spam. Learn how your comment data is processed.